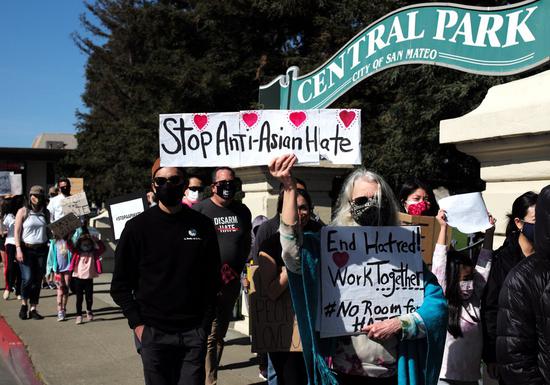 The Joe Biden administration and congressional Democrats on Wednesday condemned the exacerbating anti-Asian violence in the United States in the wake of a series of shooting incidents in Atlanta on Tuesday that killed eight people, many of whom were Asians.

Rodney Bryant, acting chief of the Atlanta Police Department, told a news briefing that the investigation was still in the "very early" stage, and that investigators cannot determine at the moment that the shooting spree was a hate crime, although multiple calls received by the police department sought to confirm that conclusion.

Police on Tuesday evening arrested the suspect, 21-year-old white man from Georgia, Robert Aaron Long, who during an interview with law enforcement at the night claimed responsibility for the shooting incidents at three massage parlors in the Atlanta metropolitan area. Eight people, six Asians and two Whites, were killed.

Long claimed that the attacks were not racially motivated, and that he had a "sexual addiction" and saw the massage parlors as a "temptation" that he wanted to "eliminate," according to authorities, adding that Long, when caught, was on the way to Florida, where he planned to commit similar crimes.

The carnage added to the already high tensions around violence and discrimination targeting the Asian American community during the coronavirus pandemic.

President Biden told reporters on Tuesday that he has been briefed on the shootings by the attorney general and the FBI director, and that even as he reserved his comments on the possible motive behind the acts due to an ongoing probe, he found anti-Asian violence in the country "very troubling."

"The investigation is ongoing and the question of motivation is still to be determined. But whatever the motivation here, I know Asian Americans ... are very concerned, because as you know I have been speaking about the brutality against Asian Americans for the last couple of months and I think it is very, very troubling," the president said in the Oval Office before meeting virtually with Irish Prime Minister Micheal Martin.

"I'll have more to say when the investigation is completed," Biden added.

Democratic lawmakers in both the House and the Senate condemned anti-Asian violence in the aftermath of Tuesday's shootings while warning of a surge in similar crimes.

Congresswoman Judy Chu and Congressman Ted Lieu, both of whom are of Asian origins, accused the Donald Trump administration of stoking racial discrimination and fanning the flame of hatred toward Asian Americans by using ethnic identifiers like "China virus," "Wuhan virus" and "Kung Flu" in describing the coronavirus.

"As a result, the anti-Asian hate crimes and incidents increased exponentially," said Chu, chair of the Congressional Asian Pacific American Caucus. She said research has found that the amount of anti-Asian Twitter traffic increased by 900 percent in the first few months of Trump's usage of the slurs. "And what we saw yesterday, is the result of that."

The House has scheduled a hearing for Thursday on rising incidents of hate crimes and discrimination against Asian Americans.

Meanwhile, Richard Blumenthal, senator from Connecticut, tweeted that the shooting on Tuesday "reflects a sickening trend that must be stopped."

"America must unite to fight the stomach-turning surge in violence against the Asian-American community," he said.

In a series of morning tweets on Wednesday, former President Barack Obama said the identity of those killed in Tuesday's shooting rampage "underscores an alarming rise in anti-Asian violence that must end." He called for ridding the country of gun violence, which he said is a "longer-lasting epidemic" compared to the coronavirus pandemic.

Most popular in 24h