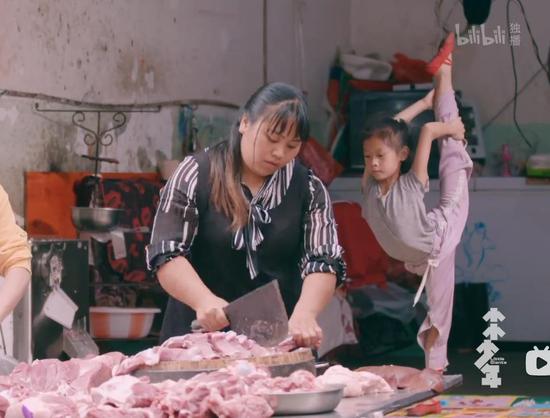 A video clip of a girl dancing at a pork stall in a village in Southwest China's Yunnan province went viral online, moving many netizens. (Photo: China Daily)

A video clip of a girl dancing at a pork stall in a village in Southwest China's Yunnan province went viral online, moving many netizens.

Outside the stall, her mom was busy chopping pork while the girl immerses herself in her dance. This is part of a documentary Little Giants made by Bilibili, a video-sharing site.

The girl, 10 years old, is named Wu Gangyun. She lives in Naduo village of Yanshan county in Wenshan autonomous prefecture. The village was identified as a poverty-stricken village in 2013. There were 72 households, and most children here are "left-behind children".

Wu Gangyun is a little luckier. Her father is a truck driver, who is always on the road. Her mom runs the pork stall, where she hangs around and helps a little.

When she was 6 years old, her mom found she liked to watch dancing videos and imitated the moves. "She said she loves ballet and the pretty dresses. My husband and I believe she loves dancing."

The parents decided to send her to dancing classes. Teachers in the county were amazed by what she can do, especially when they learned she taught herself by watching online videos.

"The teachers said she was very talented. They suggested we find a more capable teacher for her," her father said. But it cost more than what the family could afford, and they didn't know where to find such instruction.

In 2018, the mom went to learn driving at a driving school and showed her daughter's dancing videos to her classmates during breaks. The coach said he knew someone from Beijing and contacted Zhang Ping, who has been teaching dancing for 20 years.

Zhang was born in Yanshan county, later living in Beijing. In 2016, she was touched by a photo of girls standing beside a broken wall in Naduo village. So she visited the village and found many girls unattended. Some were left-behind children, while others were orphans.

"The girls were very pretty, and some are talented in dancing. Their parents were not around so I wanted them to have some fun. I brought candies, played with them and taught them dancing," Zhang said.

Most popular in 24h